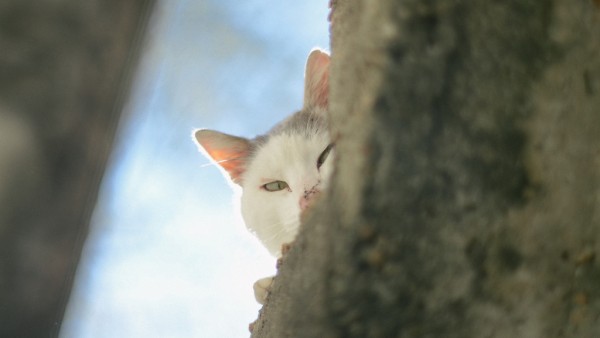 One of my favorite radio personalities, Jad Abumrad, co-host of Radiolab, gave a keynote address at the Third Coast International Audio Festival titled These Are a Few of My Favorite Things, where he talked about his experiences working in radio and the things he loved most about it.

It was from listening to this talk that I learned about what I’ll call the “Here I am” moment – the moment where a reporter steps out from behind the story they’re telling to say, “Here I am. This is me. This is who I am.” These moments aren’t long, just a few seconds once or twice in a story. But they let listeners know exactly who is behind the story.

When you attend meetups and WordCamps and conferences, you meet lots of people. And the questions we all ask one another when we’ve just met someone new are pretty much the same questions over and over again: “What do you do?” and “Where do you live?” and “Is that where you grew up?” and “How do you like what you do for a living?” and so on. But all those questions are really just one question: “Who are you? Who are you, really?”

It’s not until I know the answer to that question that I know if I’ve met someone I want to be friends with, or hang out with, or do business with, or all of the above. I think it’s all too easy to hide behind a logo or a business name or a fictional business personality that we’ve invented rather than just being ourselves. I’m just as guilty of that as anyone else. So I’ve been practicing stepping out from behind all of that from time to time to say “Here I am. This is me. This is who I am.”

Is that scary? You bet your ass it is. It’s terrifying. But I find the more that I do it, the better I am at it, and the more encouraged I am at the results. When I let people know me, really know me, I attract the people who like me for who I am. Life gets easier, business get better.

About a year ago, I had a chance to bid on a big job – the biggest job my little agency had ever done. I had just finished working with a lawyer to rewrite my standard contract that I used to make it more informal, more casual, easier to read, and easier to understand. But then, on this big job, I was worried that they wouldn’t take me seriously. I was afraid I’d come off as amateurish – too casual, too informal.

And I’m not going to lie, I almost sent the old contract, full of legalese and almost impossible for a normal human to decipher. Then I realized that if this company had a problem with an easy-to-read-and-understand contract written in every day language that they weren’t a company that I wanted to do business with, no matter how much money they were paying. I sent out my new contract and landed the gig, along with some compliments on the contract.

Shortly after I dyed the ends of my hair bright pink, I got a meeting with an organization I can only describe as my dream client. I worried that my pink hair would put them off, that they’d see me as unprofessional. But there was no hiding it. I just had to show up and see what happened. When the woman I’d been talking to by email and phone walked into the conference room to meet me, she had pink hair, too. Here I’d been worried pink hair would be a liability, but it turned out to be an asset. We had a good laugh, instantly bonded, and they’ve been one of my best clients ever since.

You’ll drive yourself crazy in this world trying to make everybody happy. Once you realize that it can’t be done, you are free to start being yourself. And when you start being yourself, you start attracting people to you who think like you do, who appreciate you, who think you’re talented and smart and amazing. And you’ll think the same of them. There is a world of difference between running a business where you’re trying to make everybody happy and one where you’re being yourself and attracting clients that are aligned with your particular brand of thinking.

If there’s one resolution I’d like to encourage you to make in the new year, it would be to do just what I’ve been praticing. Take a deep breath, and step out from behind your company name, your logo, your Twitter avatar, your Facebook photo, and say “Here I am. This is me. This is who I am.”

You won’t regret it. I promise.